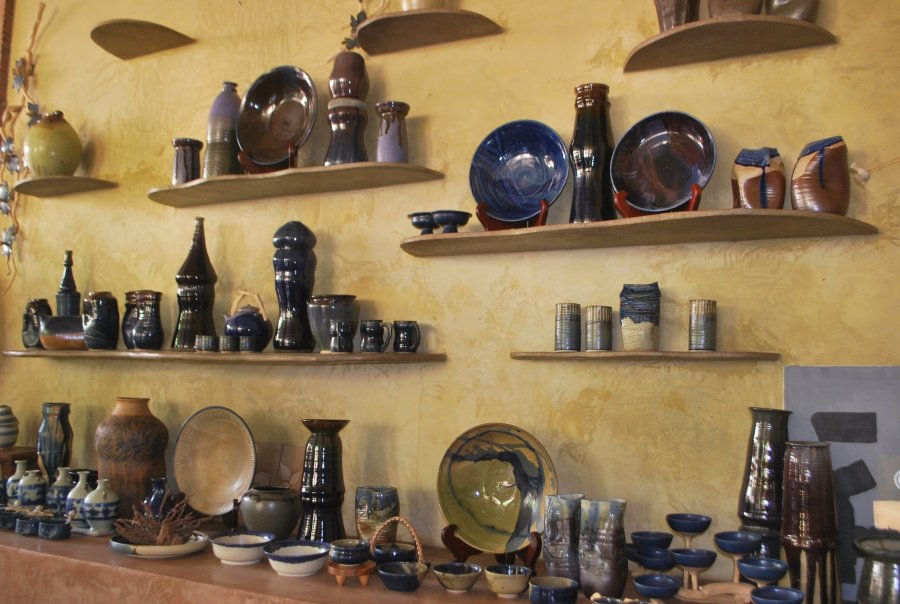 Barangay Lusacan in Tiaong has become synonymous with its famous resident Augusto “Ugu” Bigyan, a landscape and ceramics artist whose creative works have adorned well-known resorts and houses of influential people here and abroad. His Mexican-inspired house and garden lure visitors to take in the cool Tiaong air, relax in one of the quaint huts, or walk around for an up-close look at the decorative tiles, accent pieces and dinnerware displayed all over the place.

Leaf and fish patterns are used extensively in his works, giving them a Zen-like feel. Any attempt to describe Ugu’s place and his art pieces might not do them justice, and reading about them can take one only so far; thus, any nature and art lover’s list of must-see places should include his Tiaong address.

His place was the first stop in a 3-day media tour called San Isidro Festival Cultural Trail last May 13-15, 2011.  The tour was organized by Quezon Province Governor David Suarez and the Provincial Tourism Office to show how the feast of San Isidro is celebrated in four of their municipalities.

Tiaong is the entry point to Quezon and Ugu’s pottery workshop/garden is a most fitting showcase of a Tiaongin’s talent and creativity. After touring his garden and feasting our eyes on his artworks, we took a break from our visual trip for our mid-morning minindal  (Tagalog Quezon term for merienda or snacks). Ugu, an accountant  by training, is known not only for his ceramic artistry but also for his innovative ways with Filipino food.  Although he was not there to personally meet us, his staff made sure that we got to sample his lumpiang puso ng saging (banana blossoms) na may sotanghon (rice noodles), rootcrop salad with cream and palm sugar syrup, espasol, and a local delicacy called inabayan. We washed down the carbs-laden fare with refreshing gulaman and banana juice. Every item on the plate was a winner, but everyone seemed to go for second serving of the lumpia. A merienda spread like that makes one want to go back for Ugu’s famous kulawo and other lunch delights, even if this means gathering, and making prior reservations for, at least 10 people.

Some places are just worth visiting again.