How can one possibly find time to experience the thousands of festivals in the Philippines? A toughie even by some wild stretch of the imagination.

That is why the annual Aliwan Fiesta organized by Manila Broadcasting Company (the oldest radio station in the country) and the Cultural Center of the Philippines in cooperation with the cities of Manila and Pasay is a must-see. It provides a peek into some of the most colorful, adrenaline-boosting Philippine fiestas — in one day. Every year it raises the bar for the Filipino ingenuity, resourcefulness, and aesthetic sense that come into play during the numerous fiestas in the country.

The 10th year celebration of this cultural extravaganza was held last April 12-14 at the CCP Complex and had 21 contingents competing for the Best Festival (street dancing competition) award, and 22 contenders for the Best Float Design and the Reyna ng Aliwan (Festival Queen). The Best Festival entry wins a cash prize of one million pesos; not really a big amount said someone from a participating group from Mindanao, considering the tall order of preparing, training and transporting dancers and huge equipment and props over land and sea. An average contingent has about 200 members who require accommodations while in Manila, as well as big spaces where they could rehearse and buff their huge props.

Still, many want to strut their stuff at the yearly event for a chance to show their unique traditions and noble ancestry through fanciful costumes and graceful moves. Cash rewards and recognition are to fight for, but some things –particularly being able to share one’s cultural heritage amidst the exciting explosion of sounds and colors — as they say, are priceless. 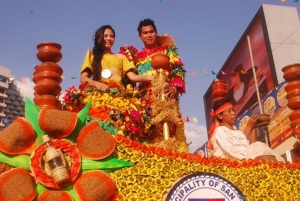 Held in the second week of December, this festival promotes the three major sources of livelihood in the municipality of San Juan – lambanog (coconut wine) brewing, pot making, and the leisure resort sector represented by Laiya. At the center of the celebration is the town’s patron saint, San Juan Nepomuceno.

This is the Ilonggo way of giving thanks for all the blessings they have received through the Holy Child Jesus. The festival is held every fourth weekend of January to the wild beating of drums and hearty shouts of “Hala Bira” and “Viva Señor Sto. Niño.” The Iloilo contingent is this year’s Aliwan Fiesta Champion, completing a straight three-peat win since 2010.

“Boling”  means dirt and this festival is held from Palm Sunday up to Tuesday of the Holy Week as a fitting reminder of our ‘ashes to ashes, dust to dust’ existence. Some men  slather mud or greased charcoal all over their bodies and try to scare people around town for fun. The Paypay Naaw tribe of Catanauan believes that there should be merry making before the 40 day Lenten activities to ward off negative spirits.

Singkaban and Halamanan Festivals of Bulacan

The artistry and the nurturing character of Bulakenyos are evident in the way they celebrate their Singkaban Festival in September and Halamanan or Garden Festival in January. Singkaban refers to decorative arches crafted from bamboos, which lend a festive note to the weeklong festival, starting with the birthday of the Blessed Virgin Mary on September 8 up to the anniversary of the proclamation of the Philippine Republic at the Barasoain Church in 1898 on September 15.

The Halamanan Festival is held in January in Guiguinto, Bulacan. It is a thanksgiving gesture to the patron saint, San Ildefonso, and a tribute to the  flourishing  plant nurseries sector that provides livelihood to hundreds of local gardeners and landscapers. 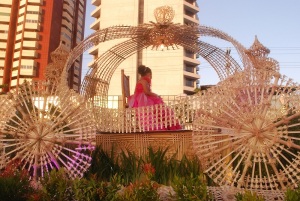 This year’s best float  winner is the Pamulinawen Festival of Laoag City. For their sheer creativity in incorporating various farm produce such as corn and garlic (!) into their design, the Ilocanos rightfully deserve to take home the PHP500,000 cash prize for this masterpiece.

Twenty-one streetdancing contingents, 22 floats and 22 fiesta queen aspirants — a tad too much for the senses in one day :-).

One thought on “Twenty-one Festivals, One Summer Day”