Pasinaya [Filipino noun] means inauguration, debut, kick-off, or the first taste or experience of something.

It is also the name used by the Cultural Center of the Philippines (CCP) for its annual open house festival that offers a sneak preview of the CCP’s performance season for a given year. The 10th Pasinaya held last Sunday, March 16, likewise served as a dry run for the festivities to be hosted during the Asia-Pacific Economic Cooperation (APEC) Summit in 2015.

Pasinaya 2014 encompassed 150 shows in music, theater, dance, visual arts, film, and literature and involved the participation of 3,000 artists from 300 different artistic groups. The event, which used to be held only within the CCP facilities, this time had simultaneous events outside the huge complex. It worked jointly with other cultural institutions from the CCP Complex to Intramuros, turning Manila and Pasay into “the most creative places on earth for one day.” 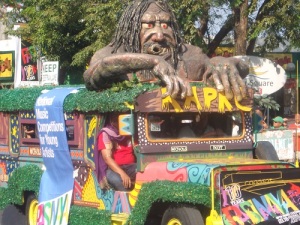 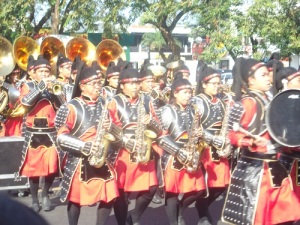 So how much creativity can one imbibe in a single day?

First stop, Eskinita. Here, a stage was set up for performances by various folkloric groups. The first one to go on stage was the Aquinas University High School Special Program for the Arts from Legazpi City, Albay.

Thanks to this group, my knowledge of Bicolano music is no longer limited to Sarong Banggi.

To better appreciate these dances, you may watch these videos of Pastores and Lapay Bantigue (Source: YouTube PH).

Next, we went inside the CCP to check out “Displaced,” a photo exhibit staged by the United Nations High Commissioner for Refugees (UNHCR) showing photographs of Filipinos displaced by Typhoon Yolanda. All photos are by award-winning photographer Rick Rocamora.

From there we went to see “Framed Abstractions” at the 3/F gallery.

We took a peek into the CCP Library where Pinoy storytellers regaled the audience with their acted-out stories for children.

On the way down to the Main Theater Ramp, we saw a group of artists surrounded by a young crowd. Turned out to be the Philippine Association of Printmakers demonstrating the basics of drypoint printing. My son, Mike, promptly tried one of the blocks and took home another souvenir for the day.

Then it was Sining Kumintang’s turn to do a Muslim dance at the Ramp. Such a sterling performance—for free! Sometimes one gets so lucky. My son who is hopelessly hooked to computer games said he had always thought folk dances were boring. He made my day when he realized “hindi pala” (it wasn’t so!).

We then rushed to Bulwagang Amado Hernandez (one of so many theaters at CCP!) to watch an excerpt of Fish-Hair Woman, a play based on the novel by Bicolano writer, Merlinda Bobis. Midway into the snippet, when the performers started to dance while singing Isperekengkeng, Isperekangkang…I knew something wasn’t right. True enough, I learned later that there was a switch in schedule and Fish-Hair Woman was staged earlier. 😦

Slow service at one of the restos in the complex caused us to miss my son’s must-see: a lecture/demonstration on how to play the marimba. In the same venue, however, we got to see demos on the proper way to wear Cordillera and Muslim costumes. The resource person (forgot his name 😦 ) shared loads of interesting information on the significance of various fabrics used by different tribes. He then showed techniques on folding and securing the malong or the tapis to prevent wardrobe malfunctions. 🙂  Watch him here as he shows the proper way to wear a tribal G-string. 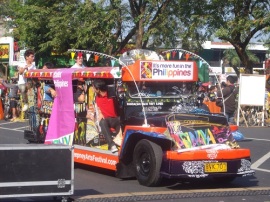 Finally, the jeepney tours! For this event, the CCP partnered with The Jeepney Company, an association of jeepney operators who ply regular city routes but who have taken on the mission of turning the jeepney into an art medium reflecting Philippine culture. The colorful vehicles transported revelers from the CCP to different cultural venues for free. There were three available routes: the Roxas Boulevard-Ermita Strip covering the Metropolitan Museum, art spaces in Mabini, and Mabuhay Restop; the Kalaw-Intramuros Strip covering the Bahay Tsinoy, Casa Manila, NCCA Gallery, and Museo Pambata; and the National Museum Strip covering the National Art Gallery and the Museum of the Filipino People.

I had not been to the National Museum in its present venue(s) so it was an easy choice.

Fernando Amorsolo’s mastery of light is evident in these two country life paintings:

So many attractions, so little time. We missed the ballet and other musical ensemble performances. The Cinemalaya short film features, too. We couldn’t stay for the closing “People’s Gala.” We missed seeing an awful lot, but whatever we saw and experienced last Sunday have given us a gameplan for what we should watch out for on the cultural scene this year.