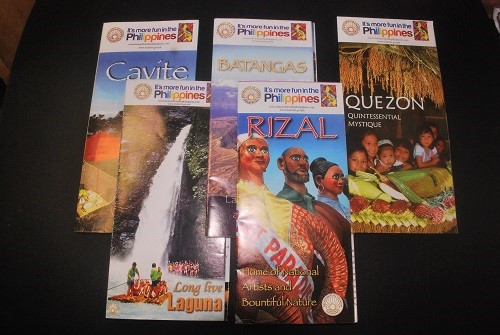 The Department of Tourism has launched its Countdown to Christmas Project the best way it could: by putting the different regions in the Philippines on focus.

“Celebrating the Regions” in the first week of November features the best of Region IV-A (CALABARZON)—its exciting destinations and unique food, culture, and crafts. Ongoing from November 3 to 7, 2015 at the DOT lobby on JB Bldg., Sen.Gil Puyat Avenue, Makati, the mini exhibit is open to the public from 8 a.m. to 5:00 p.m.

Aside from shopping for the best products of the region, visitors will be entertained by Christmas performances from each featured province. The first day of the CALABARZON exhibit was designated as Rizal Day. The rest of the week will be scheduled as follows:

WHAT TO SEE AND BUY:

Watch this group perform in this old YouTube video.

The Department of Tourism has designated 2015 as Visit the Philippines Year.

Just a few hours from Manila by bus or car, CALABARZON is a good way to start!