(published in the December 21 issue of The Philippine Star, Lifestyle section) 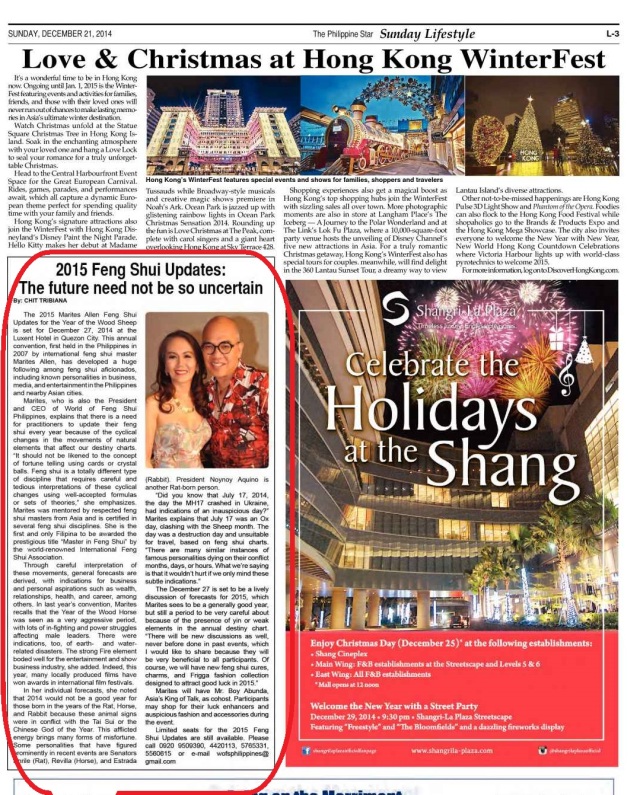 The 2015 Marites Allen Feng Shui Updates for the Year of the Wood Sheep is set for December 27, 2014 at the Luxent Hotel in Quezon City. This annual convention, first held in the Philippines in 2007 by international feng shui master Marites Allen, has developed a huge following among feng shui aficionados, including known personalities in business, media, and entertainment in the Philippines and nearby Asian cities.

Marites, who is also the President and CEO of World of Feng Shui Philippines, explains that there is a need for practitioners to update their feng shui every year because of the cyclical changes in the movements of natural elements that affect our destiny charts. “It should not be likened to the concept of fortune telling using cards or crystal balls. Feng shui is a totally different type of discipline that requires careful and tedious interpretations of these cyclical changes using well-accepted formulas or sets of theories,” she emphasizes. Marites was mentored by respected feng shui masters from Asia and is certified in several feng shui disciplines. She is the first and only Filipina to be awarded the prestigious title “Master in Feng Shui” by the world-renowned International Feng Shui Association.

Through careful interpretation of these movements, general forecasts are derived, with indications for business and personal aspirations such as wealth, relationships, health, and career, among others. In last year’s convention, Marites recalls that the Year of the Wood Horse was seen as a very aggressive period, with lots of in-fighting and power struggles affecting male leaders. There were indications, too, of earth-  and water-related disasters. The strong Fire element boded well for the entertainment and show business industry, she added. Indeed, this year, many locally produced films have won awards in international film festivals.

In her individual forecasts, she noted that 2014 would not be a good year for those born in the years of the Rat, Horse, and Rabbit because these animal signs were in conflict with the Tai Sui or the Chinese God of the Year. This afflicted energy brings many forms of misfortune. Some personalities that have figured prominently in recent events are Senators Enrile (Rat), Revilla (Horse), and Estrada (Rabbit). President Noynoy Aquino is another Rat-born person.

“Did you know that July 17, 2014, the day the MH17 crashed in Ukraine, had indications of an inauspicious day?” Marites explains that July 17 was an Ox day, clashing with the Sheep month. The day was a destruction day and unsuitable for travel, based on feng shui charts. “There are many similar instances of famous personalities dying on their conflict months, days, or hours. What we’re saying is that it wouldn’t hurt if we only mind these subtle indications.”

The December 27 is set to be a lively discussion of forecasts for 2015, which Marites sees to be a generally good year, but still a period to be very careful about because of the presence of yin or weak elements in the annual destiny chart. “There will be new discussions as well, never before done in past events, which I would like to share because they will be very beneficial to all participants. Of course, we will have new feng shui cures, charms, and Frigga fashion collection designed to attract good luck in 2015.”

Marites will have Mr. Boy Abunda, Asia’s King of Talk, as cohost. Participants may shop for their luck enhancers and auspicious fashion and accessories during the event.