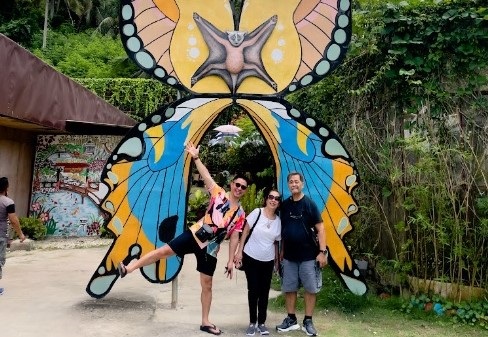 There are at least two versions on how Panglao island in Bohol province got its name. One says that Panglao was derived from the word “panggao” or “panggaw,” a native fishing device. The name evolved from “panggaw” to “panglaw” and finally to “Panglao.” The other story points to a historic event in 1803 when Spaniards came to this island and named it Panglao after the word “mapanglao” (alt. mapanglaw)  or a lonesome place.

With regard to the second version, Panglao has clearly shaken off its ‘lonesome’ connotation as it has, through the years, developed into a major tourist attraction known for its white sand beaches and fabulous diving sites. Recently, however, it has received some bad press owing to a complaint posted by a netizen involving overpriced seafood during an island hopping tour. The incident led to the closing of food stalls on the island in question (Virgin Island) – a move that certainly made many vendors unhappy or ‘mapanglaw.’

We were here around the same time that this contentious issue happened. In our case, though, we had no time for island hopping. Our limited stay allowed us to take a countryside tour instead; yet, the experience left some pretty good memories of the island that will last for a long while — and make us want to come back to see more of what we missed on our first visit.

Somewhere near, a lovely beach awaits.

Where we stayed (Henann Resort, Alona Beach), a small stretch of public beach was just a few steps away, perfect for a quiet stroll or just chilling out on lounging chairs by the shore. Truly, a much-needed change of scene after two years of pandemic lockdown.

Panglao offers a glimpse of a rich historic past.

Driving through Tagbilaran City, we stopped for a look-see at the site of the Blood Compact in 1565 between Spain’s General Miguel Lopez de Legaspi and Datu Sikatuna, a native chieftain of Bohol. This is regarded as the first peace treaty between two nations of different race and religion. The peace treaty is commemorated here every year through an annual celebration called the Sandugo Festival.

(Other sources, however, point to the blood compact between Portuguese explorer Ferdinand Magellan and Rajah Kolambu of Limasawa 44 years earlier in 1521, challenging the Boholano record.)

This church dedicated to Our Lady of the Immaculate Conception is widely regarded as the second oldest stone church in the Philippines. The foundation of the church is believed to have been built in 1595. It was declared a National Cultural Treasure and a National Historical Landmark by the National Historical Commission of the Philippines and the National Museum, respectively. It was included in the UNESCO World Heritage Tentative List of the Philippines but had to be delisted because of the damage to its bell tower caused by a 7.2-magnitude earthquake in 2013.

The magnificent church features 18th and 19th century images and altarpieces on its main altar and two side altars.

Inside the shrine, we bowed our heads in silent prayer and looked up to the ceiling in awe and appreciation of the paintings done by artists from different parts of the Philippines.

After being holed up with furry feline friends at home for the past couple of years, it was such a thrill to see (and touch) other members of the animal kingdom. In the wildlife sanctuaries that we visited in Bohol, we spent some awesome time with butterflies that didn’t fly away at the sight of people.

An albino python was so cool with being petted by visitors. We were awestruck by the flying lemur and bright-colored hornbill. And of course, the iconic tarsiers of Bohol.  Clinging to tree branches and blending in with the surroundings, it was so easy to miss their tiny form – but oh, those eyes!

Refreshing drive through the Mahogany Forest

On the way to see the famous Chocolate Hills, we drove through a two-kilometer stretch of road lined with towering mahogany trees. This man-made forest was part of a reforestation project to address the problems caused by slash-and-burn farming and to ensure proper water supply to the Loboc River. Full implementation of the project started in 1958 after years of delay owing to insufficient funding.

The Mahogany Forest is a favorite stop for tourists (us included) who want to savor the cool and breezy vibe while posing for souvenir photos!

The call of the hills

We had to cross out some items in our itinerary for the day, but there was no way we would miss climbing 220 steps for a view of the famous Chocolate Hills. But up we went and it was all worth it!

The conical, almost symmetrical hills are such a refreshing sight, inviting questions as to how they were formed. There had been several attempts to explain their origin – including volcanic activities, tidal movements, and geologic shifts. Going past these theories, Chocolate Hills have been included in the National Geological Monuments of the Philippines (along with Taal Volcano, the sand dunes of Ilocos Norte, etc.) and is being proposed for inclusion in the UNESCO World Heritage List.

The hills merited the name ‘Chocolate’ because their grass covering turns brown during the dry season. We visited in rainy August and saw them blanketed in lush green grass, and I like them better that way. Green is generally associated with nature, harmony, and many other beautiful things – a lot of which we experienced during our brief stay in Panglao.